Heather developed a new style of tactile relief work paintings that are meant to be touched.

Her large collections have enabled her to invite into the art arena the previously excluded audience of blind and visually impaired visitors, so they too can share the experience.

Based at her studio at Emsworth, near Portsmouth in Hampshire, Heather began painting sixteen years ago. Her work encompasses a wide range of styles, including miniatures, portraits, and contemporary pieces. 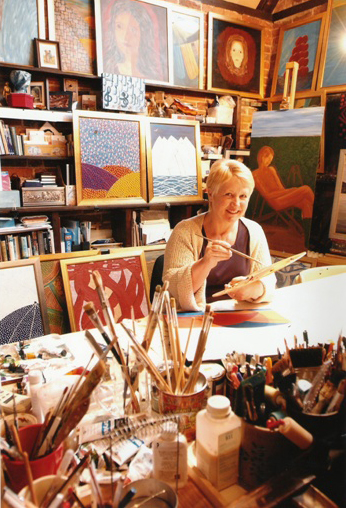 Within a few years Heather had two solo exhibitions and received her first commission to make a tactile copy of Whaam! by Roy Lichtenstein for the Touch Tours department of the Tate Modern.

Commissions also came from the Wordsworth Museum in Cumbria and two Crematoria. Her work is in Altnagelvin Hospital in Northern Ireland and the Princess Elizabeth Hospital in Guernsey. An exhibition held at the hospital was sponsored by Spec Savers and Condor Ferries.

Her latest collection of Tactile Portraits with individual audio descriptions launched World Sight day at Moorfield Eye Hospital, London and has had six solo exhibitions in the UK, with interest now from the USA.

Heather’s career work has been featured in numerous media outlets including a major Sunday supplement feature about women who turn their lives around. She has been a regular contributor to BBC Radio Solent. She gives talks to community groups and organisations and is a regular guest speaker on board cruise ships.

Her first novel, The Painting in Room 48, was launched at the end of January 2020, published by Amazon.

Artist Residency, Brison Veor, Cornwall
Three Rivers Gallery. Rickmansworth, Hertfordshire. Solo Exhibition, ‘I am not who you think I am’

St Huberts Art Exhibition, Idsworth, Hants
Artist Residency, The Island of Iona, Scotland
Allen Gallery, Alton, Hants. Solo Exhibition. ‘ I am not who you think I am’

Kruger Interior Design Company –
I established this interior design company in 1995 and executed commissions for designing, redecorating and refurbishing properties, including contemporary and period houses, offices, shops, and a sports clubhouse.

Lecturer at Chichester College of Art and Technology History of Art, Design and Interiors. Specialist in Painting.